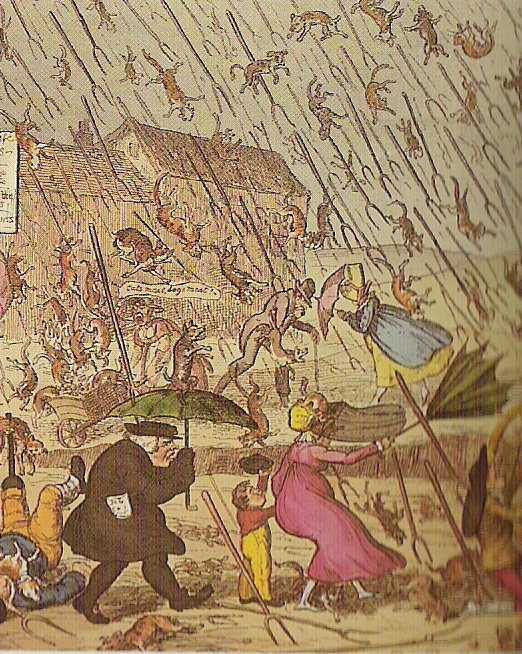 An idiom is: ‘A group of words established by usage as having a meaning not deducible from those of the individual words’. OED.

English can be challenging at the best of times with pronunciation, unusual spellings and grammar rules that even a seasoned English user can sometimes make mistakes with. Then there are idioms. Unless you’ve heard an idiom before, you could easily think that the people using it are talking in some sort of code. ‘It costs an arm and a leg’ doesn’t involve any sort of surgery and ‘it’s raining cats and dogs’ can easily be interpreted as a fluffy, heavenly onslaught of teeth and claws.

To help with this and to inject some humour into what can be a fairly boring subject, we will be bringing you an idiom a week. We will attempt to explain and put into context an idiom that is used in common English speech.

This week’s idiom is: It’s raining cats and dogs

The phrase in context.

Toby was walking along the road minding his own business when the rain started pouring down. Fortunately he was just passing the house of Matha, a friendly, warm-hearted woman who he knew wouldn’t mind giving him shelter. He knocked on the door and Martha answered as the storm took hold, the rain lashing down as thunder rolled in. Martha ushered him into the house out of the rain. “It’s raining cats and dogs out there,” Toby said as the water dripped off his nose. Martha was surprised at this, not because it was raining cats and dogs, but because she didn’t know dogs could speak.

But where does this phrase come from?

It was first used in 1651 by Henry Vaughan in his Olor Iscanus, where he refers to a roof where ‘dogs and cats rained in shower,’ and a year later, the English playwright Richard Brome wrote in his comedy City Witt, ‘it shall rain dogs and polecats.’ However, the popularity of the phrase resulted from its use by Jonathan Swift.

In 1710, Swift published ‘A Description of a City Shower’ in Tatler magazine where he describes the filthy streets of 17th/18th century England, where heavy rain would wash debris through the streets, including dead cats and dogs. But the first proper use of the phrase as we have it now comes from the publication of Swift’s Complete Collection of Genteel and Ingenious Conversation, in 1738, a satire on the conversations of the upper classes: ‘I know Sir John will go, though he was sure it would rain cats and dogs.’

It is not known for certain where the phrase comes from etymologically, however, some theories have been advanced:

If  you have any more information on this phrase please feel free to leave a comment and don’t forget to follow this blog for your weekly idiomatic dose.

For more information on the idiom, ‘it’s raining cats and dogs’: